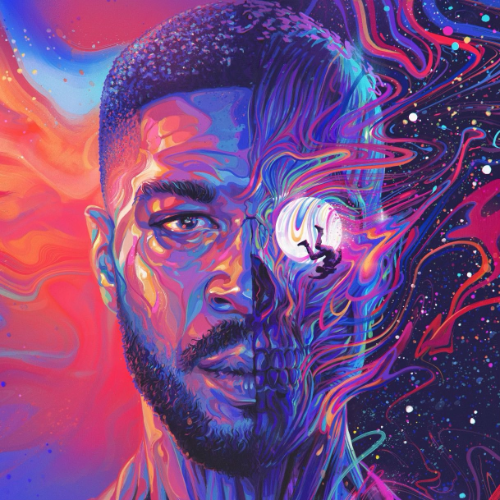 11 years following the first Man on the Moon installment, the trilogy is now complete.

Kid Cudi has returned tonight with the release of his highly-anticipated seventh solo studio album Man on the Moon III: The Chosen. In a new interview with Zane Lowe, the Cleveland superstar explained his decision to once again go the moon man route.

It was conversations I would have with my friends, like Dodd and Dennis. And then me being in the right place creatively. I was already in a really good place working on Intergalactic, going crazy on the Scotts sh-t, had that in the chamber. But then I was making something else that didn’t fit those two projects. And I think after two or three songs, I was like, “Whoa, this sh-t really feels like a Man On the Moon. Like this is what the universe is telling me to make here. So I think after two or three songs, I was like, “This is it.” I made “Tequila Shots,” “Another Day,” and She Knows This,” I believe.So I made those songs first. And that’s why you hear “Tequila Shots” and it sounds like such an introduction. It sounds like you pick right back up where we left off 10 years ago.

The album, which is broken up into four acts, was produced almost entirely by Dot Da Genius and Take a Daytrip, with additional work done by Plain Pat, Emile Haynie and Mike Dean.

Before diving in, read the brief synopsis provided by Cudi himself.

In the last 10 years, Scott Mescudi has been through hell and back. After feeling like his world was over, he found hope and overcame the darkness that was plaguing his life. But happiness isn’t forever. What he thought was peace turns into a nightmare. He finds himself lost dealing with the same pain he had not felt in years. In one night, he must face himself again and fight to win back his soul from the evil Mr. Rager.