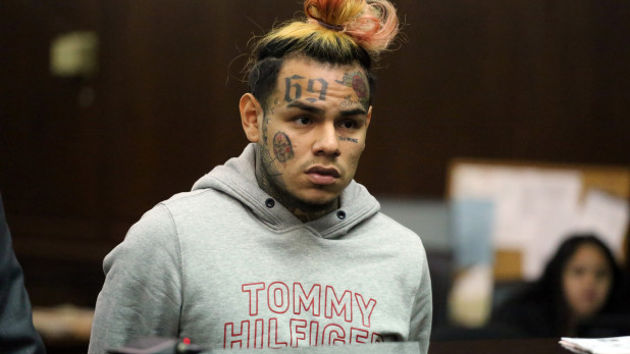 UPDATE: After originally being denied bail as he was deemed a flight risk, 6ix9ine is back on the streets.

The rapper was transferred to Rikers Island earlier today before his legal team called an emergency court hearing.  The judge presiding over the case ultimately “acknowledged a significant change in circumstances” and granted the artist $150,000 bail.

As part of the deal, 6ix9ine will have to surrender himself to officials in Houston on Monday, where he is expected to post another $5,000 bail.

The 22-year-old rapper was arrested on Wednesday for an outstanding warrant related to an exchange he had with a fan in a Houston mall.

According to reports, the 16-year-old fan was recording a video of 6ix9ine when the rapper grabbed said fan by the neck demanding he delete all footage.  Prosecutors claimed 6ix9ine grabbed the teen “by the neck, causing small scratch marks and pain” while the rapper’s crew surrounded the victim in an intimidating manner. A judge signed off on misdemeanor assault charges and ordered 6ix9ine be arrested.

6ix9ine has been denied bail and will remain in jail until Houston officials extradite him on July 20th.